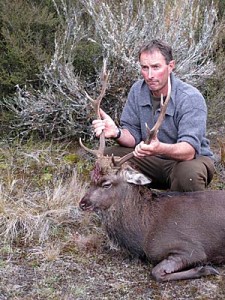 Sika deer Cervus nippon Native to China and Japan Sika deer were first introduced near Oamaru in the South Island back in 1885 but were unfortunately soon shot out by local farmers because they were damaging their crops. In 1904 the Duke of Bedford in England gifted the New Zealand Government 6 Sika deer from an English park believed to be a Manchurian sub-species. However, it later turned out that they were of a mixed variety of Sika deer, and hence the contrasting looks in the New Zealand Sika population. These 6 deer were liberated on Poronui Station near Taupo in the Central part of the North Island. Sika deer are smaller in size than Red deer and their antlers; unlike Red deer have only 8 points (4 on each side).

Generally speaking, most Sika stags become 8 pointers on their 3 year and those that have say only 6 points never grow on to become 8 pointers.  The main noticeable physical difference between Red and Sika deer is the predominant white rump with a back outline on a Sika deer’s rump, whereas a Red deer tends to be more a more ginger colour.   Sika deer are much harder to hunt than Red deer as they are far more wary and the most cunning of all deer I have hunted. I once caught a Sika hind out in the open and on seeing me she ran over to some scrub laid her neck down and pinned her ears back remaining perfectly still as she watched me. If I had not seen her run to the spot I would not have been able to make her out.

Sika deer are most vocal during the roar with the stags using a number of different calls the most common call is the donkey-like “hee haw” call with big stags repeating this up to 6 times while smaller stags less. Sika stags also use a single call when they have a hind in or about to come into season. I have found the big stags will constantly move about at this stage in the rut and take the female in season off lesser stags (big bull Tahr will do this too). I remember watching a 6 pointer holding 4 hinds using this single call when a big trophy 8 pointer turned up without giving a single roar pinched the hind that was in season and made off with her leaving the 6 pointer to look after the other females. 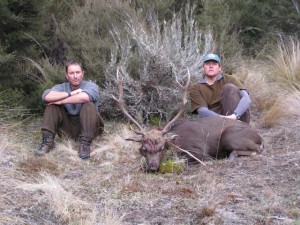 Getting close to big stags is quite difficult as they often have smaller satellite stags hanging around looking for an opportunity to pinch a female or 2. This is where a good guide comes in to advise the client which stag is the one to go after.

Sika deer have been known to interbreed with Red deer with hybrids becoming more common in recent times as the wild Red deer herds that occupy the same territory as Sika have recovered in numbers since the decline in the venison recovery industry.

Sika can be hunted on either public lands or private blocks with booking needing to be made well in advance to secure the best private blocks. 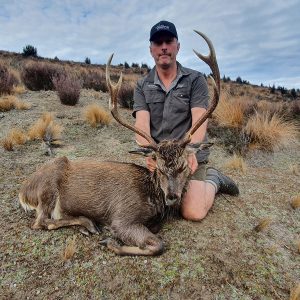 I first hunted Sika in the Tararua rangers in the lower North Island as a culler. The Department of Conservation was then trying to eradicate a small herd of Sika deer that had been let go in the area during the early 1980’s. However, the attempt failed and the herd is now well established. My most memorable memory of hunting Sika was when I spent over 2 hours sneaking in on a roaring  8 point Sika stag in heavy Manuka scrub so thick that the only way I could move in on him without him hearing me was to move forward only as he roared.  He was roaring at a Red Stag (both species will readily roar at each other) that was in the same gully and letting him know this was his patch. When I finally saw him he only offered me a small part of his head and neck to shoot at. As it was my bullet had to past through 2 trees to get him. This remains one of the best stalks I have had in on a deer and remains so to this day.