Fallow deer are native to southern Europe, parts of Asia Minor, and the Mediterranean. Liberations of Fallow deer have occurred all-round the world. Such countries include Britain, United States, Australia and South Africa as well as New Zealand. The first liberation in New Zealand occurred back in 1864 in the aniseed valley near Nelson. Further liberations occurred in both the North and South islands over the next twenty years. In more recent times during the venison boom days of the 1970’s and 1980’s attempts were made to farm fallow deer. However, these attempts proved less successful than either Red deer or Elk because they are more difficult to handle. Trophy wise these farmed fallow deer were of superior quality to that of the early 1800 liberations. Some deer farmers retained their fallow deer stock in captivity for the supply of safari high fence parks while other farmers just released their fallow deer into the wild.

Two of the properties I hunt on are from herds that have been established for well over a hundred years, while the herd on the third property comes from a more resent liberation, post the venison boom and produces fallow stags of high SCI scoring quality. Each of these properties practices its own different style of game management in order to produce a superior fallow deer trophy which is reflected in a varying trophy fee being required to be paid to the different properties owners.

Fallow deer are the second most widely distributed deer in New Zealand. They are smaller than a red deer and have palmated antlers. Colour variation is common in both sexes from almost black to dark brown with speckled white spots. Occasionally you will see white deer as well. Fallow deer are gregarious with the two groups combining for the rut between March and May. During the rut is the best time to hunt them with the optimum time being the third week of April. Stags are not overly vocal during the rut tending to give out a series of grunts almost like a pig! Fallow are a very timid deer compared to other deer species and have a well-developed sense of smell and hearing something hunters need to bear in mind whilst hunting for them.

I first hunted fallow deer in the Mt Richmond ranges in the 1980’s when I was employed as a goat culler in the park. It was whilst I camped in the Pelorus valley that my dog Basil snuck off and bailed a fallow spiker up a small side creek. As I crept into view of the dog and deer, I was surprised to see the spiker suddenly rear up on its hind legs and start boxing at the dog with its front feet then it would drop down and charge the dog. I have never seen a deer do this before or since. It hadn’t seen me and after it repeated its boxing trick a couple of times I shot it for camp meat.

In 2013 I was fortunate to have the opportunity to hunt and shot a good fallow buck in the Western Province of South Africa near Cape Town.

Fallow deer Dama dama Options for hunting Fallow. Fallow can be hunted on either public lands or private blocks with booking needed to be made well in advance to secure the best private blocks during the best times.

Currently I have private blocks I use in both South Canterbury and Central Otago. Bookings to hunt on these blocks require a trophy fee to be paid to the farmers with trophy fees varying between properties. 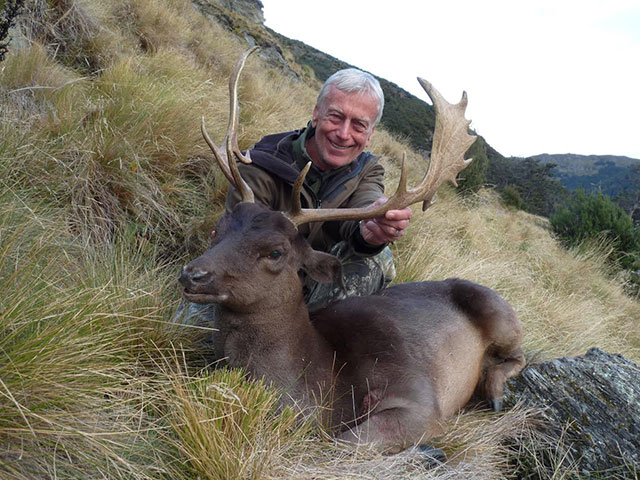 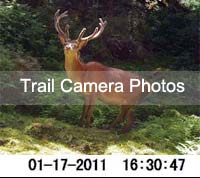 Click on the image above or the link below to view our trail camera photos.

Tracks of a Hunter 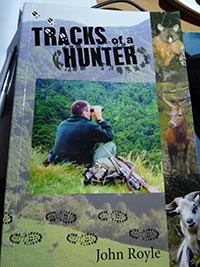 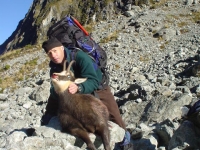 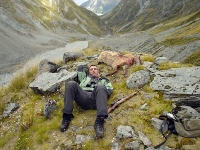 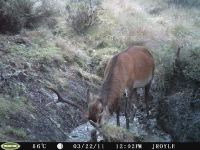 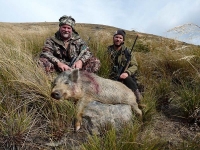 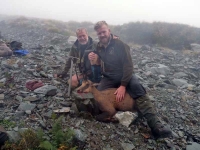 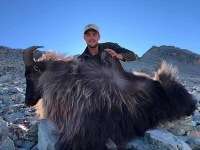